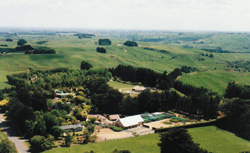 Cross Hills is situated 540 metres above sea level with a free draining soil and a reliable rainfall, average 1140 millimetres. The water supply for the property comes from a spring, supplying crystal clear water all year round. 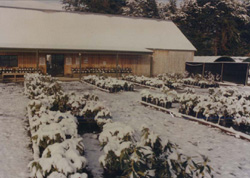 Winters can be cold with falls of snow quite common. These conditions are similar in some aspects to those found in the Himalayas and China from where the majority of rhododendron species originated.

Development of this area from virgin bush began in approximately 1886. The first settler built a very modest dwelling just inside the cattle stop and surrounded it with cupressus macrocarpas for shelter. The two massive trees in the front parking area now over a100 years old, are all that remain. A solitary oak tree, still growing in the Cafe Garden, was the only other exotic tree on Cross Hills, when the farm was purchased in 1938 by Eric Wilson the founder. 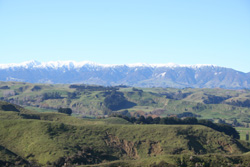 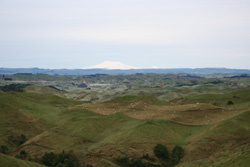 Since 1938 the 240 hectare property has been fenced and pastures and access improved, until today it is fully developed into a high producing sheep and cattle hill farm. 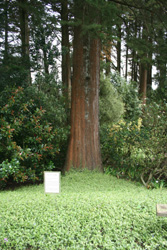 All buildings on Cross Hills have been constructed from cupressus macrocarpa timber grown on the property. The timber in the Garden Cafe and Plant Centre was milled from trees planted in 1939, grown from seed off one of the specimens in the front car park. Stones from the base of the Ruahine Ranges have been used in the stonework on the front of the Garden Cafe. The same stone has also been used in the retaining walls throughout the gardens.

The gardens have been developed in stages. Following the building of a new Homestead in 1951, the grounds were landscaped with native and exotic trees and shrubs, including many rhododendrons. These flourished and flowered to perfection, the climate and soil obviously to their liking. 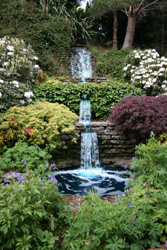 As interest in rhododendrons grew, a decision was made in 1970 to plant a large collection, so the second garden we call the Cafe Garden was created. An old orchard was pulled out and hundreds of cubic metres of soil carted in to form hills and valleys. In two years this garden was fully planted. Visitor interest was such that a decision was then made to extend the garden and to continue to landscape for visitor enjoyment. In 1972 the South Hill Garden was started by fencing off 1.4 hectares of a hay paddock. In successive years planting continued, with a later addition in 1982 being the Azalea Bowl

In 1984-85 the Middle Flat above the Conifer Valley was planted. This area and the Far Flat which was planted during the period 1986-89, contain many of the new and exciting imports to Cross Hills. 1990 saw the finish of the Waterfall and Ornamental Pools at the base of the Clematis Bank. 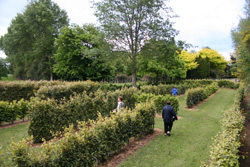 The year 2000 was commemorated with the planting of our Millennium Maze. As the years unfold the camellia hedges, consisting of 30 different varieties and over 1000 plants, will get bigger and brighter and we’re sure will provide some fun for both our young visitors and those young at heart! The gardens now cover approximately 7 hectares.

After many importations and some home breeding, the rhododendron and azalea collection now totals over 2000 varieties. With the thousands of bushes planted, it has been possible to create the many different colour groupings you will see at Cross Hills. Since the passing of Eric Wilson, the founder of Cross Hills, in 1992 and his wife Merle in 2003, their son Rodney and wife Faith own and operate this multifaceted business with Rodney and Faith’s son Scott who is very involved and is responsible for many of the day to day activities at Cross Hills. The business involves the growing and sale of quality plants, a well established garden tourism attraction, the running of the 240 hectare farm and the  the production of their permanent aluminium Lifetime Plant Labels. Angela, Scott’s wife, successfully organises Cross Hills Gardens Country Fair held on the 3rd Saturday in November each year.

With plenty of new ideas in the offering, Cross Hills Gardens will always be to the forefront of the gardening scene.